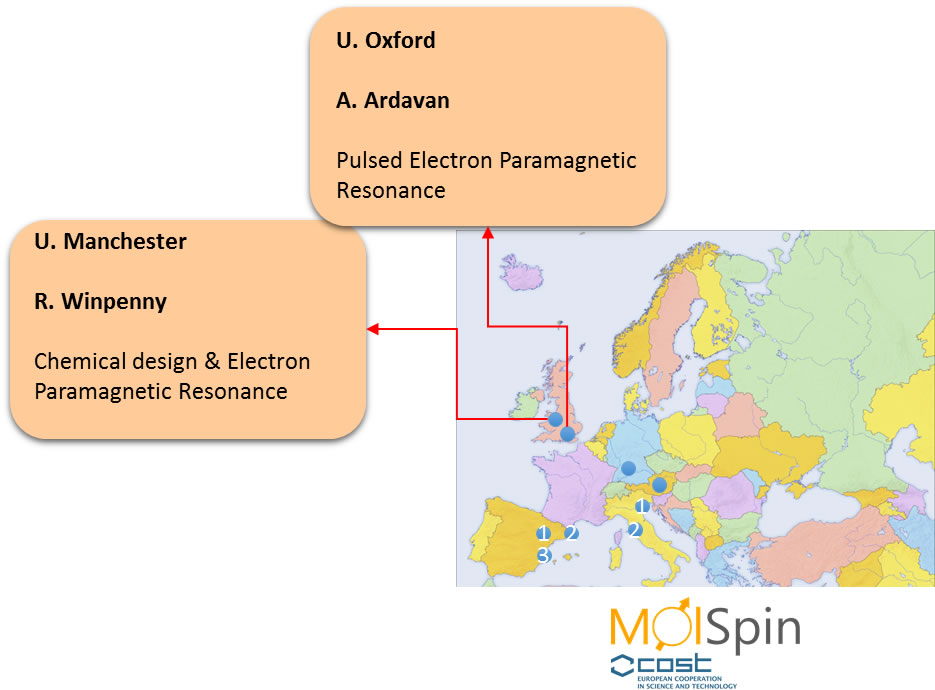 The University of Manchester (UMAN) was rated in the top four in the UK in the 2017 Jiao Tong rankings. The Molecular Magnetism Group at Manchester (www.molmag.manchester.ac.uk) will contribute to SUMO. This is one of the largest groups in molecular magnetism in the world, involving three professors (Winpenny, McInnes, Collison), four senior research fellows (Tuna, Muryn, Timco, Chilton) and around six further post-doctoral researchers and ten PhD students. The group also hosts the UK National EPR Facility, funded by the EPSRC (UK). It is equipped with four X-ray diffractometers for single crystal structural analysis, a SQUID susceptometer, small-angle X-ray scattering, multiple EPR spectrometers, XPS equipment, AFM/SEM/STM equipment.

The University of Oxford has an international reputation as a world-class centre of excellence in research and teaching and has been awarded the European Commission’s HR Excellence in Research Award. Oxford Physics is one of the largest and most eminent departments in Europe, pursuing forefront research alongside training the next generation of leaders in Physics. The recent UK Research Excellence Framework exercise found that Oxford’s Physics Department had the joint highest grading for research environment of all UK Physics. The research outlined in this proposal will be carried out within the sub-Department of Condensed Matter Physics (CMP), which hosts world-leading research in strongly correlated electron systems and multiferroics, magnetic resonance, biophysics, and organic and inorganic semiconductors. CMP has 16 permanent academic staff, 38 post-doctoral researchers and 82 graduate students.

The chemical design of decoherence-free spin qubits is a new SUMO hot article in Chemical Science.